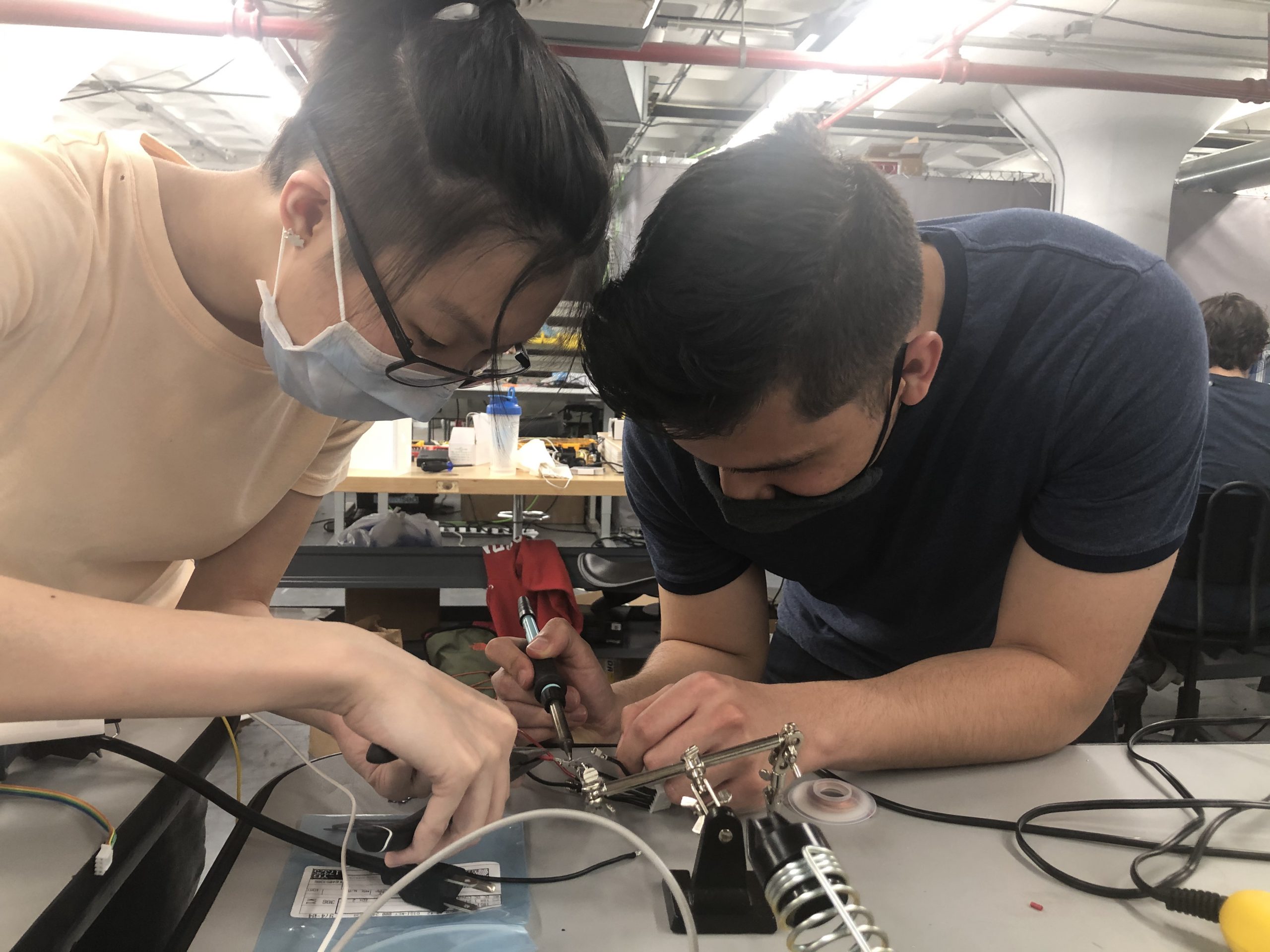 What does it take to engineer a ventilator for the COVID-19 pandemic?

Smart, motivated, and available people. The right materials. Time. All three are difficult to come by during a global crisis, but The Ventilator Project is finding a way. 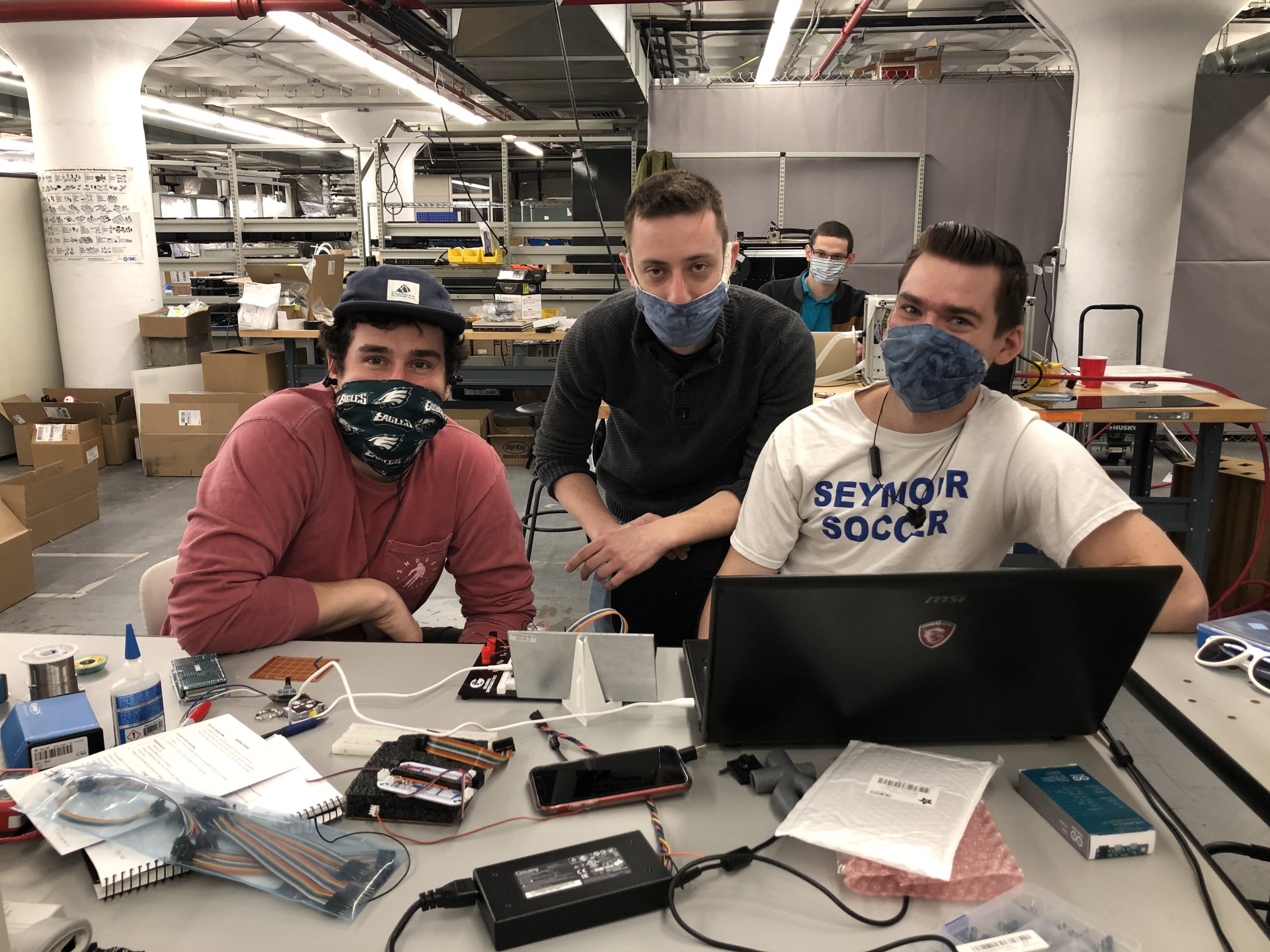 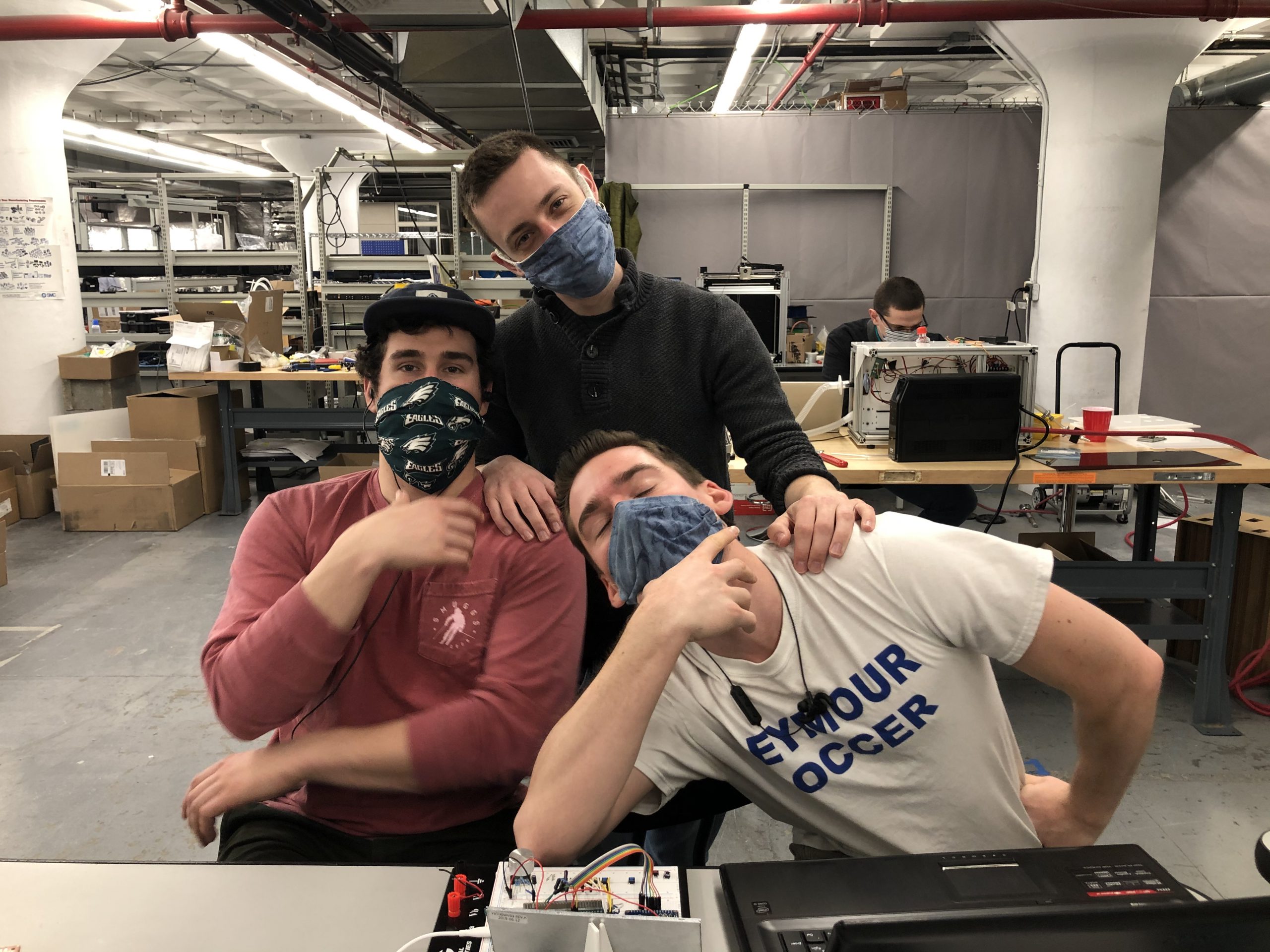 Gathered with five other members of the onsite team in the MassRobotics workspace, Justin Schroeder stands at around 6’2”, with curly hair edging around the bottom of a dark red baseball cap. The color matches his bulky mask, which covers the entire lower half of his face.

There’s not much of a hierarchy within the engineering team, but Justin has been in more of a leadership role recently. His fellow engineer and classmate, Noah Pacik-Nelson, declares him to be “the god when it comes to 3D printing and CAD,” but Justin attributes his team status more to the fact that he’s been here the longest by about a week.

“It’s not much, but with the speed that we’re moving back here, anything makes a difference,” he says. 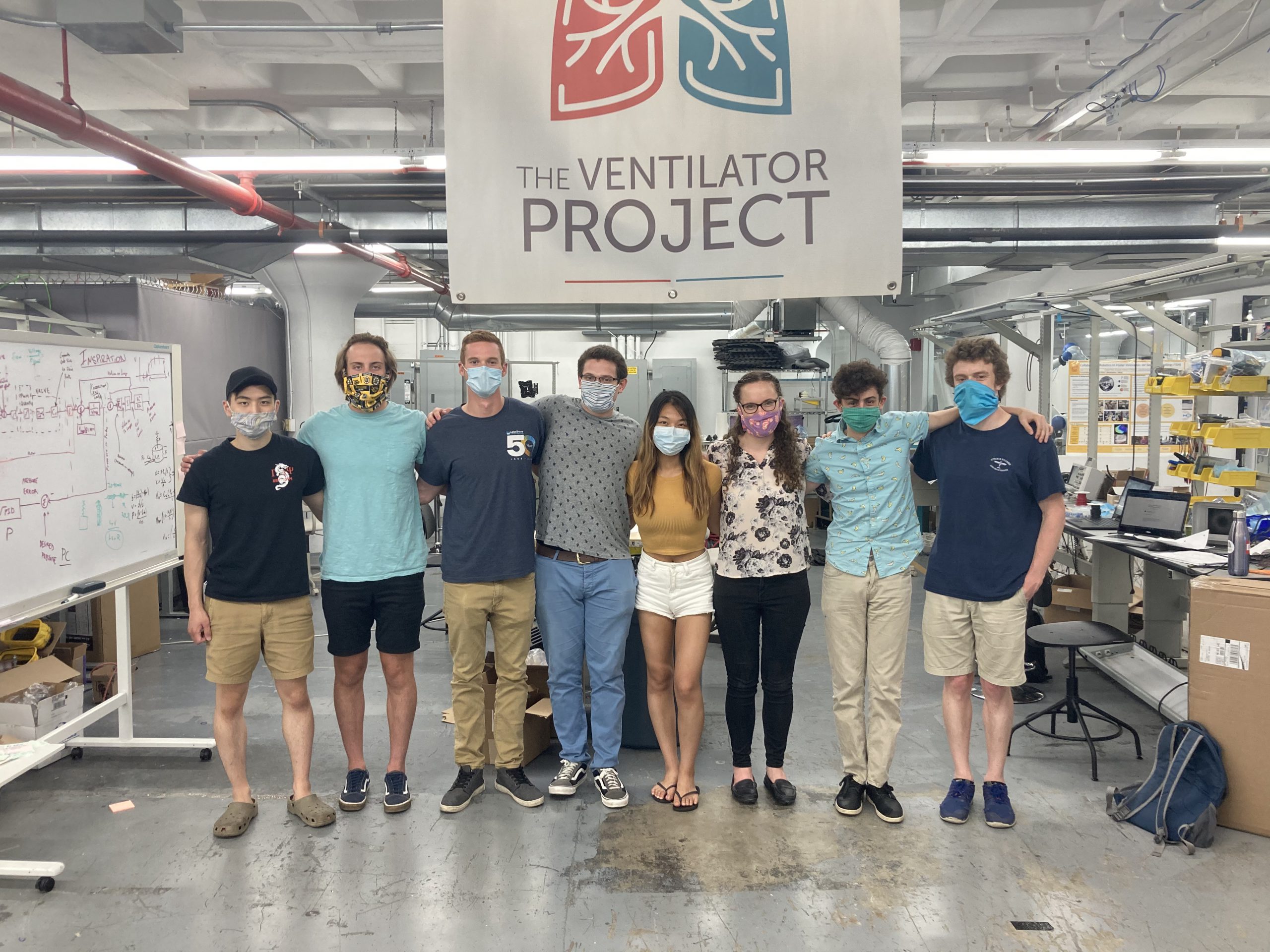 “We’re looking for people who can take whatever project they’re given and just run with it.”

It all began when Justin received a call from Noah during his last semester at UConn. Noah had worked for Tyler Mantel in the summer of 2019. He wanted to know if Justin would join him in working for Mantel again on a different project this time: building ventilators for a newly founded non-profit.

Starting with Noah and Justin, TVP’s engineering team has grown into a cohesive unit of firmware, electrical, mechanical engineers collaborating to build the best possible ventilator to meet the demands of the pandemic. Onsite, team members are mostly undergraduates and recent graduates. There are about fifty engineers off-site with up to 30 years of experience in their respective fields.

“We all have a lot of topical familiarity across the board.” says Courtland Priest, the design lead for the AIRA ventilator. “All of us have to be really involved with every aspect of the design.”

Everyone on the engineering team is familiar with the ventilator’s electrical layout, as well as its firmware, or the software that’s permanently programmed into a device’s memory. They’re also working closely with the supply chain engineers to figure out how everything will be assembled on a line.

All machines go through iterations while they are being designed. This refers to a cyclical process aimed at getting closer to a desired result. Engineers prototype, test, analyze, and then build a better prototype for the next iteration.

AIRA’s latest prototype is now undergoing external testing at Intertek, an international Quality Assurance facility, to evaluate whether or not it meets manufacturing standards. The final report from this stage of testing will be available shortly. 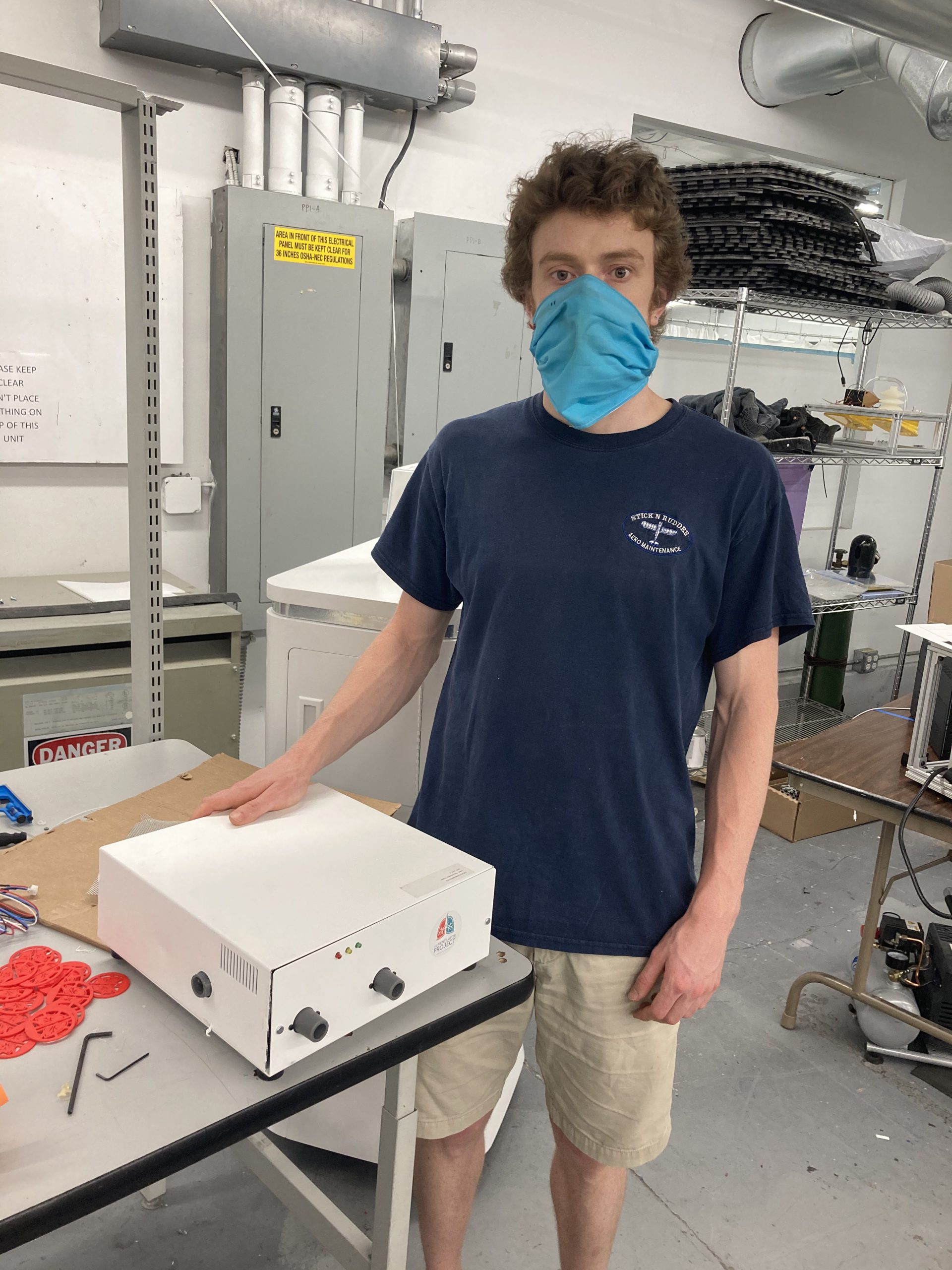 “We all have a lot of topical familiarity across the board. All of us have to be really involved with every aspect of the design.”

“Right now, we’re in the development phase,” says Justin. “Our main goal is to support the FDA team, so if there’s something that Intertek suggests that we should change, those changes can be made right away.” 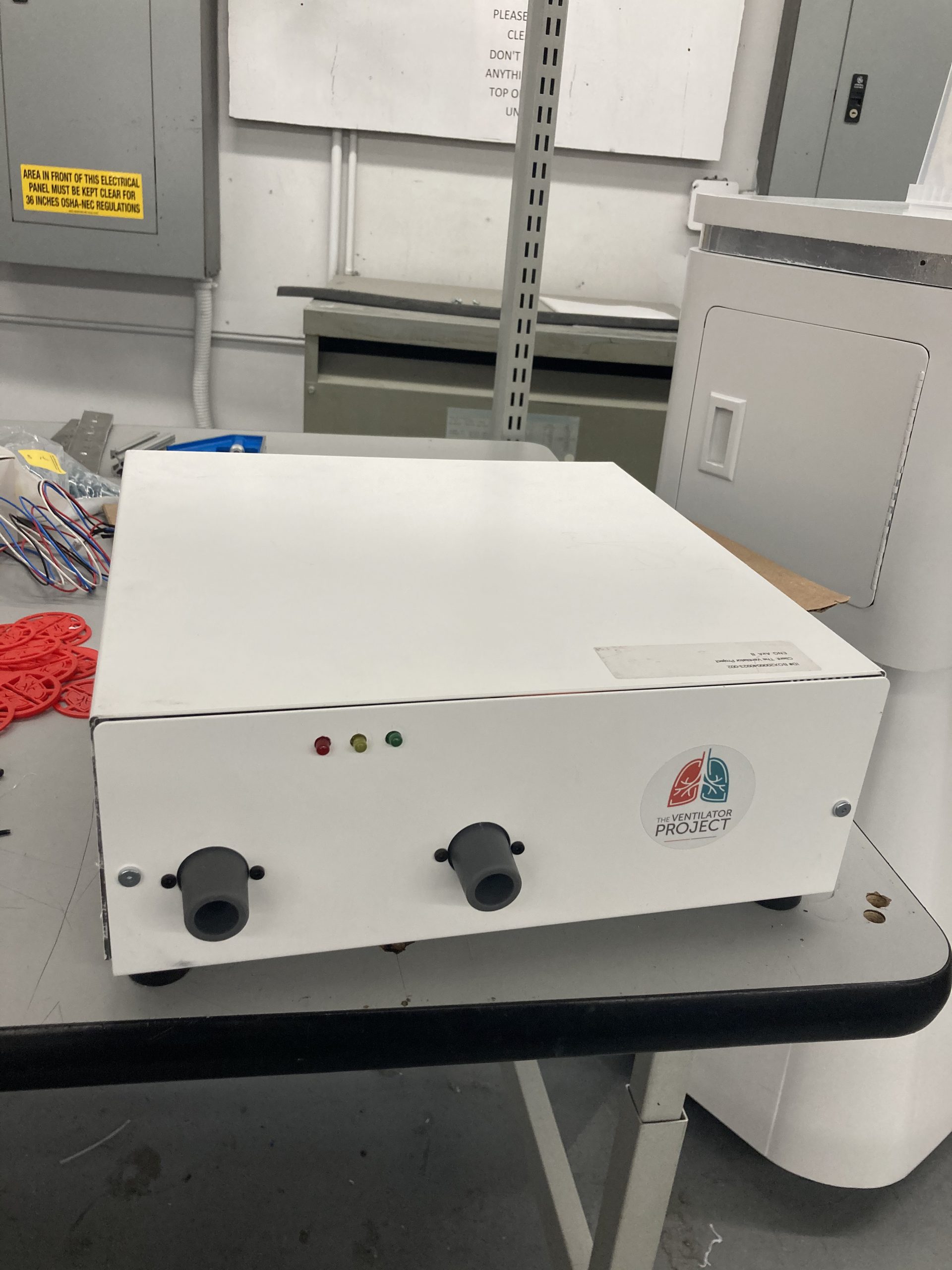 “In addition to that, we’re looking forward to the next development phase, so that on the next iteration of this device we have some more improvements that we can make aside from just small changes for manufacturing purposes.”

The engineering team is constantly on the lookout to recruit more qualified people, and they receive plenty of applications.

But this kind of work isn’t for everyone. TVP engineers are self starters with long hours. Courtland attests to having been at the worksop for over 30 hours once, Justin has stayed here for three days straight.

“We’re looking for people who can take whatever project they’re given and just run with it,” Justin says. “Everyone else sets our timeline, and we work to it as best we can. But the team’s been pretty fantastic so far.”

“It’s been very cohesive,” Courtland agrees. “This level of communication and the willingness to understand where people are coming from wouldn’t have been a reality without the particular people we have here. The work ethic, and the commitment to the cause, have been outstanding.”

Want updates on the engineering team?

The Race Against Delta

The Evolution of AIRA

Get in the Car and Drive!